Nominations were submitted to the Missouri District Office in February.  In mid-March, the District returned a list of those names that were allowed to stand to the Call Committee along with a detailed profile of each candidate.  The Call Committee is spending time reviewing each nominee in depth, conducting research and meeting regularly to determine those top candidates to reach out to and have further discussions with, including initial video conference interviews.  While the current worldwide health situation may impact when and how we reach out to a potential pastor, please know the Committee has been and will continue to move the process forward in a respectful manner.

WHAT IS THIS “CALL PROCESS” ANYWAY?

As we enter this critical stage, it is important to explain to and remind members how the call process works. In the LCMS, pastors are normally “called” by a congregation to serve. It’s a process that differs from a job offer in that we believe pastors are called by God to serve as pastors and called by congregations to serve as their pastor. The call process takes time, on average between 12-24 months, and consists of prayerful consideration of congregational needs, candidate names, interviews and visits with pastors and their families.

The theology and practice surrounding the call has developed over centuries of Christian experience. In some denominations a bishop determines where a pastor serves. In the LCMS, it is normally congregations that call pastors. The CTCR (Commission on Theology and Church Relations) worked in 2003 to give clarity to issues surrounding the call. Their document says in part: “Since God places men into the pastoral office through the church, the call possesses both a divine and human dimension. The call is divine in that God has taken the initiative to establish the office. It is God who calls an individual to serve the ministry of the Word within the office. And it is God who promises to bless such work. But the call also has a human dimension in that God entrusts the task of calling to human beings. They are to see to it that the office is filled in a decent and orderly manner. These two dimensions – the divine and the human – correspond to the two dimensions of the church itself. On the one hand, the church is, properly speaking, the assembly of believers gathered by the Holy Spirit around Christ proclaimed in the Word and Christ present in the sacraments. These are constitutive of the church. On the other hand, the church possesses an organizational character as its members arrange for the regular distribution of the means of grace. Although the divine character of the call is primary, the human activity by which the divine call is issued is not without importance. As the church carries out its responsibility of serving as God’s instrument for calling individuals into the office of the pastoral ministry, it must distinguish between these two dimensions when establishing a call process. The church must always administer the call in ways that respect and uphold its divine character, while at the same time affirming the contingent character of the human procedures developed within a given context. Humanly devised procedures should not be treated as if they are divine mandates. Nor should they be carried out in such a way as to lose sight of the fact that the Lord of the church is the one who ultimately calls men into the office of the public ministry.”

Quoted from “Theology and Practice of the Divine Call”, A Report of the Commission on Theology and Church Relations of the Lutheran Church–Missouri Synod”, February 2003, pages 26-27.

The Call Committee for Senior Pastor was finalized on Thursday, September 19. Thank you to the many people who provided recommendations through  . The Church Council worked to ensure we had good leaders, diversity of interests, and multiple skill sets on the Committee. 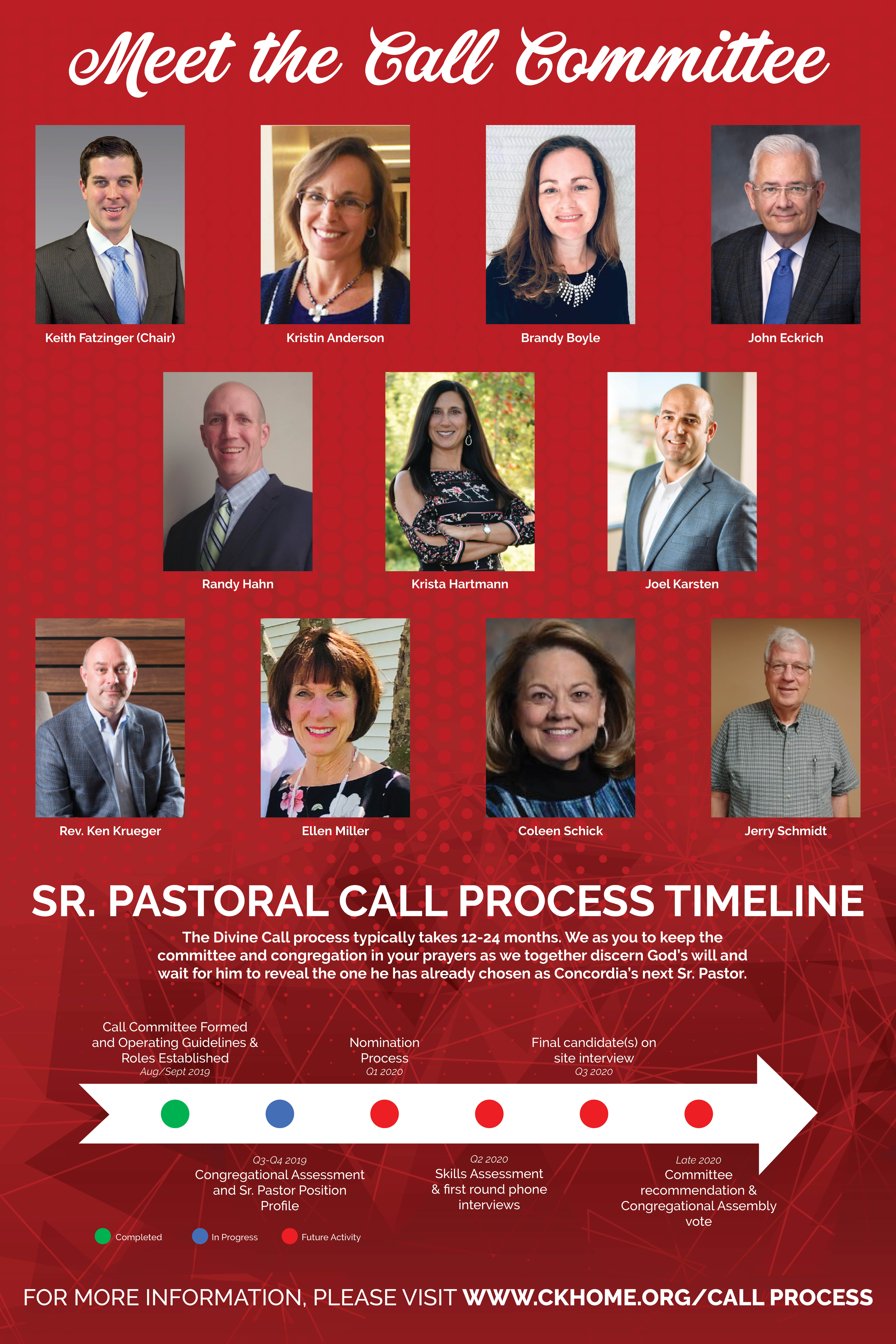